Our nation is home to a number of resident and migratory bird species. And sanctuaries are the best place to get their sweet melodies soaked. The country hosts more than 50 bird sanctuaries that the winged creatures visit each year. As growing numbers of Indians become addicted to bird watching, they explore the sanctuaries and enjoy the company of these beautiful birds too!

Here is a rundown to some of the best Bird Sanctuary in India for birdwatchers!

Nestled in the Haryana Sultanpur Bird Sanctuary district of Gurgaon, this is the ideal weekend destination for bird enthusiasts. A large number of domestic and migratory birds from Central Asia, Siberia and Europe are hosted at the park. Further, there are four watch towers in different parts of the sanctuary which stand tall.

The Bharatpur Birds Sanctuary, situated in Rajasthan, is a slice of heaven for bird watchers. It is one of the world’s most beautiful parks, attracting indigenous aquatic and migratory birds from various parts of the globe. The Bharatpur Sanctuary was declared a UNESCO World Heritage Site in the year 1985. Often referred to as Keoladeo National Park, it derived its name from an ancient Hindu temple dedicated to Lord Shiva. Moreover, it is one the most popular one!

Salim Ali Bird Sanctuary is an estuarine mangrove swamp in Goa that represents a refuge for bird lovers. It is located along the Mandovi River, away from the Party capital’s hustle. Farm to a variety of coastal birds, jackals, crocodiles as well as flying foxes. Moreover, for better viewing opportunities a watchtower is also erected inside the park.

Kumarakom Sanctuary is a favourite haunt for thousands of Himalayan to Siberian birds. The key attractions are Siberian Cranes, Flycatchers, Waterfowl, Larks and many more. Also, it is located along the Vembanad Lake, and also provides bird watching opportunities to cruise across the lake as well.

The Vedanthangal Sanctuary is the country’s oldest one, occupying 74 acres of land. This protected area lies in Tamil Nadu’s Kancheepuram District. This area was the common hunting ground for the landlords living nearby in the 18th century. Further, every year the sanctuary’s wetlands host more than 30,000 migratory birds.

Chilika Lake, Asia’s largest saltwater lagoon, flaunts a lush ecosystem around its brackish water, with aquatic flora and fauna. Moreover, the lake attracts an incredible number of resident and migratory birds including the Moorhens, Herons, Greylag Geese, Flamingos etc. In addition this region is a real treat for bird-watchers and ornithologists too.

Located near Vaduj in Maharashtra, Mayani Sanctuary is one of the country’s most prestigious sanctuaries. A rich ecosystem blesses the area and lures nature lovers from every nook and corner. Moreover, the sanctuary is packed with numerous native and migratory bird species including Coot, Black Ibis. In addition, it also has Painted Storks Flamingos and many more.

Hotels And Motels: Learn The Difference

5 Bike Friendly Breakfast Spots For Cyclists That Open Up Early!

From sheltering men to their Gods, caves in India have been special right from ancient times. Indian cave systems usually bring to mind the north-eastern state of Meghalaya with its extensive network of caves; surprisingly the southern state of Andhra Pradesh has the second largest system of caves in India, the inconspicuous Belum Caves.  The word Belum derives from the Sanskrit ‘Bilum’ which means caves, so it is just a repetition to call these caves Belum Caves. Belum Caves is a network of underground calcareous caves at the deepest point, more than 3 kilometres long and 29 metres deep.

Moreover, at present, about half of this length is publicly available. Visitors from nearby Gandikota are attracted to this site. Mainly those who intend a day trip that will visit both of these locations. This area has made the availability of limestone and water very suitable for cement factories.

Here the hot climate is as rugged as the terrain. Belum caves, situated in the southern part of India, remain hot for most of the year. Also, the best time to visit it will be between the months of October and February when the weather is good. Further, the temperature in the underground caves is marginally higher than the temperature at ground level. It is due to continuous carbon dioxide accumulation at the bottom of the caves.

How to reach Belum Caves

Gandikota is usually carried out as a day trip from Chennai or Bangalore, the two major cities nearby, in combination with a visit to the nearby Belum caves. The best choice is a day trip from each of these cities and it can be achieved using a hired taxi, but if you want to make it back on time, you have to start very early. The nearest railway stations are Tadipatri, 30 kilometres from here, and Banganapalli, 33 kilometres away. You can find taxis and buses from Tadipatri, while there are frequent buses from Banganapalli. Most of the buses stop at Kolimigundla, from where the Belum Caves shuttle service is open.

Punnami Hotel, run by the Andhra Pradesh government’s department of tourism, APTDC, is the only choice if you want to remain close to Belum Caves itself. But Punnami only offers dorm-type accommodation, and if you want a decent bed, you’d better go to Tadipatri which is a little far away.

The citizens here speak Telugu, Kannada, Tamil, Hindi, and even English to a good degree. You will be shocked at the number of multi-lingual guides available here. Even the people are courteous enough to ask us what language you would prefer.

The canteen owned by it is directly next to the APTDC hotel. The canteen serve a multitude of offerings. As well as a few breads, both North and South Indian. It would be a shame not to taste the world-famous mango of Banganapalli after visiting a place so similar to Banganapalli.

Don’t forget to look at our travel section for more such posts.

Spiti Closed For Tourism For The Entire 2020

Spiti is one of the most sought-after tourist places in India. To get away from the hustle-bustle of the urban cities, people seek solitude here. The tranquil mountains and the soothing valleys, it is a perfect getaway for people seeking refuge. Spiti is bordered in the northern side by Ladakh, Tibet in the East, Kinnaur in the South-East and Kullu valley in the North. Moreover, the treelined getaways, pine forests, green meadows, beautiful monasteries and the houses of the inhabitants are loved by the tourists. A perfect place to retreat when Delhi is sweltering as Spiti is a cold desert valley, and hence it experiences extreme cold temperature during all seasons. Nonetheless, we have sad news for the wanderlusts, as it will be closed for tourism in 2020.

“Spiti Valley is closed for any kind of tourism activity in for this year 2020, specifically till 31st October 2020. Tourism activity of any kind will not be allowed which includes jeep safaris, package tours, trekking, and camping. We want to inform all travellers and tourists, who are planning to visit the Spiti valley in the coming days, that no tourism activity will be conducted in the valley till October 31 in the wake of the COVID outbreak. No tourism activity of any kind such as jeep safaris, package tours, trekking and camping will be allowed. The decision not to resume tourism and keep it and its tourists safe was taken unanimously after several meetings with all stakeholders such as hoteliers, homestay owners, guides, travel associates, cab drivers, panchayat representatives and villagers and the local village committees formed to fight COVID challenges.”

Furthermore, he stated that

“As the winter is approaching, the Spiti valley will be far more vulnerable to Covid-19. Anyone needing medical assistance will have to be taken outside it and maintaining social distancing in cold conditions will not be possible,” he added.

“We collectively believe that our valley cannot afford exposure to the pandemic. The decision not to resume tourism is a difficult one for us, as the valley depends heavily on tourism, but it is a necessary step to check the spread of Covid-19 in the Spiti valley.”

Check out: Places To Take a Long Drive In India

Places To Take a Long Drive In India

Ever wanted to just head out for a long drive with a couple of friends? Having Chai & Maggi for every stop? Looking at the gorgeous scenery and just enjoying the road? If yes, then you’re not alone. Here’s a list of places you can do exactly just that.

The trip from Guwahati to Assam is a thrilling ride across some of the most difficult terrains in the Himalayan land. The journey takes to the best of extreme road journey stretching for over 10 hours covering approximately 520 km. The challenging ride on this 55 km road stretch would make your journey even more enthralling. Gangtok to Lake Tsomgo in winter is a ride through the dreamy landscape that would fill you with awesomeness. There are road journeys that make you rejoice and reminisce and remain etched in your memory forever. In fact, most of the mountain journeys are remarkable in their own way. And Guwahati to Tawang is one such magical journey. The stretch boasts of incredible views and plenty of dangerous hairpin bends that would leave you thrilled. You must be utterly cautious while driving on this road. Every Indian, as well as foreign national, must have the Inner Line Permit (ILP) to enter Arunachal Pradesh. One of the most beautiful roads in the northeast, the Shillong – Cherrapunjee highway can be found engulfed in cloud and mist for the most duration of a year. And when the whole thing subsides, there appears a tranquillizing view that only fewer mortals would dare to forget. The one and a half-hour ride is a 55 km journey of bliss and boasts of tremendous views. 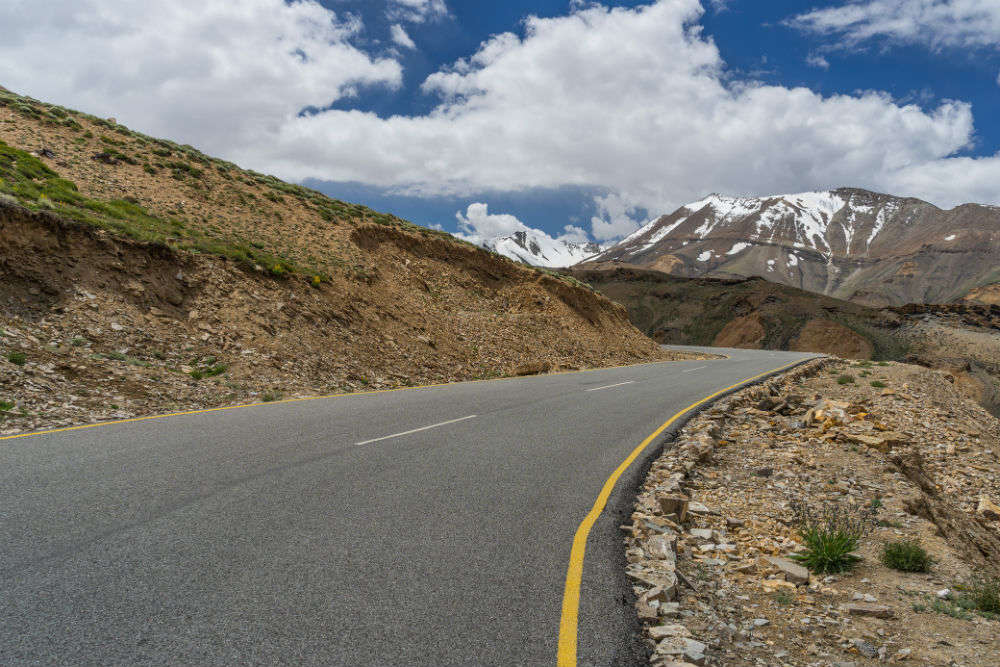 via- Times Of India

I believe that there are roads journeys serene and stunning that cast a huge spell on us and can’t be described in a mere few words. Manali-Leh Highway is one such road that would overwhelm you leave you speechless for sure. The 479 km stretch of road remains open to the public for 3-4 months in a year before heavy snowfall cuts off the road route leading to this part of the Trans-Himalayan land from rest of the country. The 2-day journey is studded with views and spans over 2 days. Popularly known as the East Coast Road, the Chennai-Pondicherry highway is a road for the discerning travelers. The road runs parallel to the vast Bay of Bengal and is every traveler’s fancy. The journey epitomized by the seamless ocean view, cool ocean breeze, and an endless streak of pine around is the most preferred road to drive on to reach Pondicherry from Chennai. 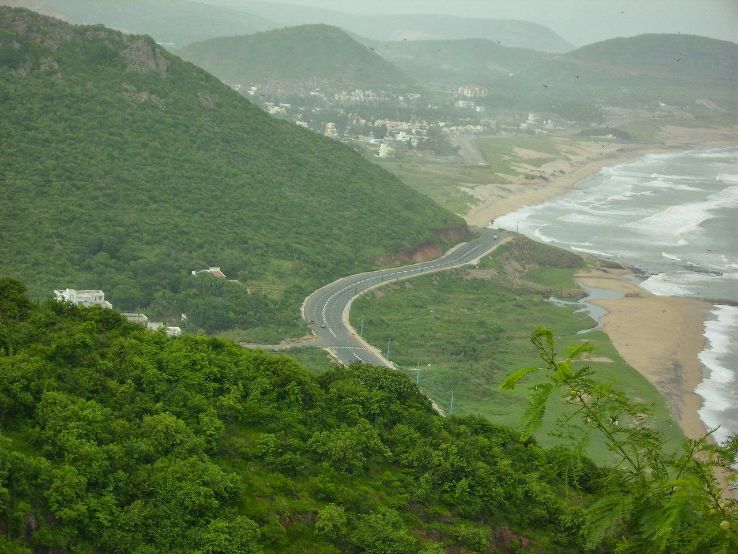 If you are in the southwest coastal region of Indian mainland this is the drive that would leave you enthralled for sure. The ride from Visakhapatnam to Araku Valley is stunning in every way and stretches to 114 km along the Visakhapatnam Road. Are you up for this 3-hour ride of the lifetime?